Concert in Celebration of the Bicentenary of Jacques Offenbach’s Birth

An associated project of 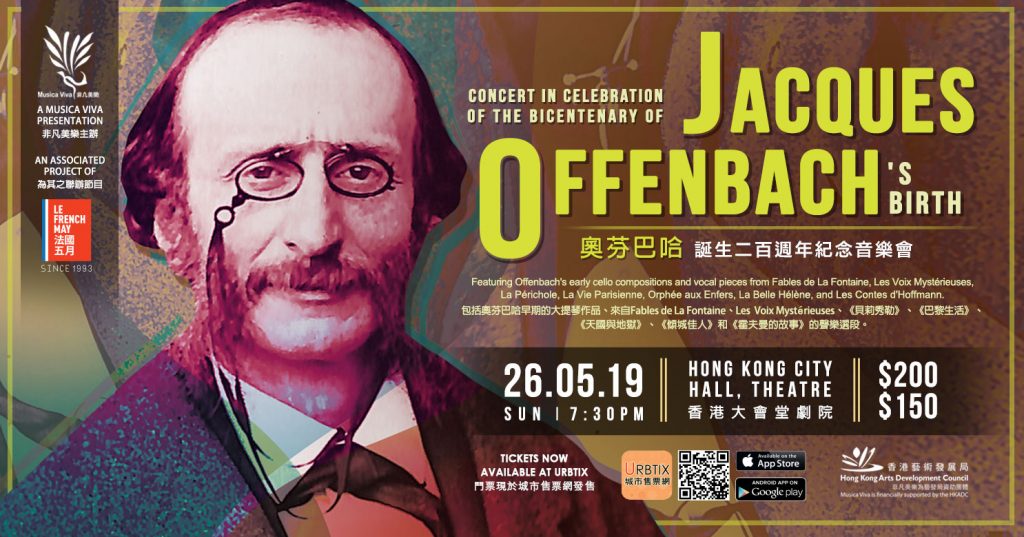 Jacques Offenbach was born on 20 June 1819. Born in Cologne, the composer studied cello at the Paris Conservatoire and then became a composer who is famous for his operettas (light opera). The composer had composed more than 100 operettas and was known for the famous opera Les Contes d’Hoffmann (The Tales of Hoffmann), which was left unfinished at his death.

Chanson à boire (‘En endossant mon uniforme’) is in Act 3, where a party is hosted by Bobinet, a dandy, with his servants dressed as aristocrats. The costumes generate excitement as more characters join the lively ensemble.

Pauline, joined by other lady guests, drinks to Baron Gondremarck’s health in a lilting waltz (‘A vous Baron’). The Baron replies with a toast to the ‘nobles’ at the party. All enjoy plenty of wine and gaiety.

Offenbach’s La Périchole was first performed at the Théâtre des Variétés, Paris, in 1868. The title is the name of a famous Peruvian entertainer Micaela Villegas (1748-1819), known as ‘La Perricholi’. She was the subject of a one-act play by Prosper Mérimée which had been performed in 1850 in Théâtre des Variétés. Librettists Halévy and Meilhac wrote a two-act version which was premiered in 1868. It was adapted to three acts in 1874.


Act I is set in the main square in Lima where everybody is celebrating the birthday of the Viceroy, Don Andrès. However, the Viceroy is in disguise as a doctor trying to discover the public’s real opinion of his rule. He sings the lively ‘Sans en rien soufler à personne’.

The Viceroy is very taken with La Perichole and offers her the position of lady-in-waiting in his household. However, as the position is only open to married ladies. La Perichole agrees to a hasty marriage once she recognizes Piquillo as the potential husband, but he has not recognized her. Having had plenty of wine, she sings ‘Ah! quel dîner je viens de faire!’, a waltz with characteristic hesitant phrases.

As Piquillo says he loves another, Perichole writes him a hasty letter, ‘La Lettre de la Périchole’, to explain what is happening, but declaring her love and faithfulness to him.

In 1842, when Offenbach was in his early twenties, he wrote a set of six songs for Voice and Piano entitled Fables de La Fontaine. These were settings of moralistic tales by Jean de la Fontaine (1621-1695), popular for their witty, pictorial images of life. Many had already been set to music. ‘Le Corbeau et le Renard’ is the second song and depicts a conversation between a raven and a fox. The raven has cheese in his beak and the fox tricks it into dropping it by flattering its singing. ‘Le Rat de ville et le Rat de champs’ is the last song. Here, the witty song contrasts uncertain city life with a more settled countryside.

As a travelling cello recitalist, Offenbach also composed his own pieces. He wrote Harmonies des bois Op 76, a set of three pieces, in 1853. The second of these, ‘Les Larmes de Jacqueline’ (‘The Tears of Jacqueline’) was frequently played by the British cellist Jacqueline du Pre. The depth of expression in her recordings of this piece became particularly poignant with her diagnosis and early death in 1987 from a degenerative disease.

Orphée aux enfers, to a libretto by Ludovic Halévy, Offenbach’s first full-length successful work, is in two Acts. The operetta is a satirical parody of the original Greek story with pointed contradictions and situation reversals. It was revised in 1874 by Hector-Jonathan Crémieux (1828-1892) as a four-act ‘opera férie’ (‘fairy opera’), though this version was less popular.

Act 2 is set in Hades (Hell). Pluton (God of the Underworld) is afraid he will have to release Eurydice back to Orpheus, and has her hidden. Jupiter (King of the Gods) eventually finds her and is able to enter her cell by turning himself into a golden fly and entering through the keyhole. They sing ‘Duo de la mouche’ (‘Fly’ Duet) where Jupiter’s part includes imitating buzzing sounds!

Menuet, Galop Infernal er Choeur ‘Le minuet et vraiment si charmant’ is in Act 2, Scene 2 where the Gods are having a party in Hades. Jupiter calls for a minuet and all join and sing in this old-fashioned dance. Soon, however, the tempo changes to a lively gallop, the famous, and scandalous, ‘can-can’. All sing and dance enthusiastically.

Les contes d’Hoffmann (The Tales of Hoffmann) adapts three short stories by E. T. A. Hoffmann (1776-1822). In 1851, Jules Barbier (1825-1901) and Michel Carré (1822-1872) wrote a play Les contes fantistiques d’Hoffman which Offenbach had seen at the Odéon Theatre in Paris. In 1876, having returned from America, he learned that Barbier had adapted the play and it was being set to music by local composer, Hector Salomon (1838-1906). Offenbach took over the project, but work was slowed by intervening profitable lighter works. Rehearsals took place in late 1880, but Offenbach died on 5 October, just four months before the scheduled opening on 10 February 1881.

After the Prologue, Act 1, based on a section of Der Sandmann, opens with the guests arriving for the inventor and scientist Spalanzani’s introduction to his ‘daughter’, Olympia, in reality a mechanical doll. Hoffman falls in love with her as she sings ‘Les oiseau dans la charmille’. She falters towards the end and has to be wound up in order to complete the song, but Hoffmann doesn’t seem to notice.

Act 2 is based on Rath Krespel. Krespel, knowing that his invalid daughter, Antonia, loves Hoffmann, tries to separate them by hiding her away. She longs for his return and sings ‘Elle a fuit, la tourterelle’ (‘He has flown, the turtle-dove’).

Act 3 is adapted from Die Abenteuer de Silvester-Nacht (‘The Adventure on New Year’s Eve’) and is set by the Grand Canal, Venice. Giulietta, a courtesan, is approached by Dappertuto, flashing a diamond and singing ‘Scintille diamant’. He demands Hoffmann’s image, she complies in a pointedly gentle waltz.

After further entanglements, including a duel in which the jealous Schlemil is killed, Giulietta agrees that from tomorrow, she will be Hoffman’s forever, but he must leave the party immediately. He agrees, singing ‘O Dieu de quelle ivresse’ (‘O heav’n with what delight’).

The cello solo, Deux Ames au Ciel (‘Two souls in heaven’), Op 25 was written in 1843 when the twenty-four-year-old Offenbach was already a successful cello recitalist. With its thoughtful and intense mood, it was published a year later.

Offenbach originally wrote ‘Chanson de fortunio’ to be included in a play, Le Chandelier, by Alfred de Musset (1810-1857) which was performed at the Théâtre Français in 1850. He included the song in his 1852 set, Les voix mystérieuses. It was also developed into a One-Act comic opera in 1861. Fortunio sings of his love for Jacqueline, a lawyer’s wife, and is eventually rewarded.

‘La rose foulée’ (the Stride Rose) is the fifth song of the cycle, to a poem by Charles Poncy (1821-1891). The rose, damaged by an unthinking passer-by, suffers, but hopes to rise again.

The comic opera, La belle Hélène, to a three-act libretto by Henri Meilhac and Ludovic Halévy, describes Helen of Troy’s elopement with Paris which led to Trojan Wars. Offenbach’s 1864 setting was extremely successful, the first season running to over 700 performances.

‘Amours divins’ is sung by Helen in Act 1 as she laments the death of Adonis and her need for the return of love.

‘Au mont Ida trois désses is sung in Act 1 by Paris as he describeds his famous Judgement on Mount Ida, naming Aphrodite the most beautiful goddess. In return, she promised him the affections of the most beautiful mortal woman, Helen of Troy. Unfortunately, Helen was already married to King Menelaus of Sparta. The elopement occurs later in the operetta.

A return to La Vie Parisienne provides the final scene this evening. Towards the end of Act 1, the final, colourful arrival at the Gare de l’Ouest is a Brazilian millionaire. He sings ‘Je suis brésilien’, explaining his return to Paris with his riches and his determination to sample the delights to the full. He announces a Masked Ball and encourages all to attend and enjoy the dancing and laughter.

The Masked Ball is the Grand Finale, where, after some chance meetings of former lovers, and some embarrassment, there is final reconciliation. All sing ‘Par nos chansons et par nos cris, célébrons Paris!’ reaffirming the glitter and glamour of Parisian life. 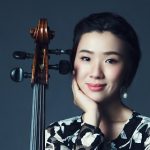