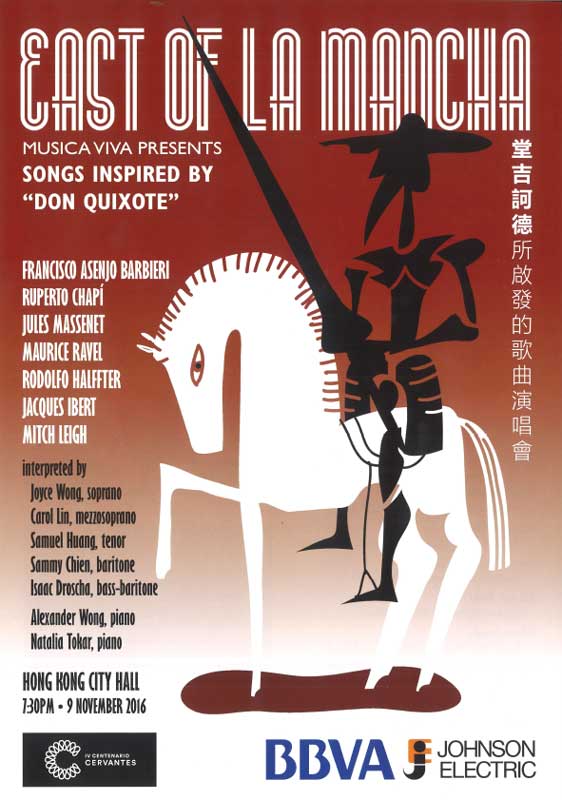 The first sound film of Don Quixote was the 1933 adaptation by Georg Wilhelm Pabst, starring the great Russian bass Feodor Chaliapin. Pabst commissioned five different composers—Jacques Ibert, Maurice Ravel, Marcel Delannoy, Manuel de Falla and Darius Milhaud—to write a song series for Chaliapin to perform in the film, without informing any of the composers that the others had also been approached.

Maurice Ravel’s “Don Quichotte a Dulcinée” would be his last composition; it was in fact written from his sick-bed. He was however too ill to meet the deadline, and Ibert’s submission (performed later in this programme) was chosen instead. The result strained the friendship between the two composers and Ravel considered suing the producers. But Ravel’s three songs have their debut anyway the following year, sung by baritone Martial Singher at Paris’s Théâtre du Châtelet.

In “Chanson romanesque”, Don Quixote proclaims his love for Dulcinea by swearing to grant her every wish, or die in the attempt. In “Chanson épique”, Don Quixote solemnly prays to Saint Michel to aid in his defence of his lady and asks that his blade be blessed by a beam from Heaven: D’un rayon du ciel bénissez ma lame. The last, “Chanson à boire”, is a buoyant drinking song: Je bois à la joie! — “I drink to joy!”

Ravel (1875-1937) came from the Pays basque near the Spanish border; his mother had grown up in Madrid. The influence of Spain is evident in these songs.

A collection of poems by both award-winning and emerging poets from Hong Kong, Singapore, the Philippines and beyond, Quixotica illustrates how Don Quixote continues to inspire and illuminate across oceans and centuries.

This evening’s selections are from some of Hong Kong’s best-known English-language poets. These include a cycle of three poems by Viki Holmes in which she re-imagines Dulcinea. followed by three poems by Page Richards (“An offering to the one who properly goes mad”), Kate Rogers (“My father and Don Quixote”) and Tammy Ho Lai-Ming (“Books as wild grass”), in which the themes of Don Quixote are brought forward to illuminate the present-day.

Spanish composer Rodolfo Halffter (1900- 1987), hailing from a family whose members remain musically active today, was Music Secretary for the Propaganda Ministry in the 1930s Republican Government. After the Spanish Civil War (1936-1939) he went into exile to Mexico, where he lived until his death in 1987. His brother Ernesto, also a composer, had been on the other side, and stayed in Spain. Halffter was able to return to Spain from the 1960s and in 1986 was awarded Spain’s Premio Nacional de Música.

Hallfter was not alone in being exiled to Mexico, where Cervantes became one of the expatriates’ cultural touchstones. The text for Halffter’s “Three epitaphs” comes from imagined, and somewhat ironic, funerary inscriptions in the novel itself. They are labelled “Para la sepultura de” (“For the tomb of”) Don Quijote, Dulcinea and Sancho Panza respectively.

It isn’t possible to separate Halffter’s opus from the effects of his exile. This work harks back to the solidity of a sixteenth-century Spain — including references to music of the period — as a comment on the regime from which the composer had been exiled.

Composed towards the end of his life, Don Quichotte is the last of the operas of Jules Massenet (1842-1912) that is performed with any regularity. In Massenet’s version of the story, the farm girl Aldonza of the original novel becomes the far less simple Dulcinée, a flirtatious local beauty. As is sometimes the case, art imitated life: Massenet, who was 67 was in love with Lucy Arbell who sang Dulcinée at the first performance. The role of Don Quichotte was specifically conceived for Feodor Chaliapin who starred in the film more than twenty years later.

In “Quand la femme a vingt ans” (“When a woman is twenty”) Dulcinée sings that riches and tributes are very well, but that le temps d’amour s’enfuit—the time for love is fleeting.

Don Quichotte’s ode to Dulcinée is “Quand apparaissent les étoiles”(“When the stars appear, when night veils the land from the depths of the heavens, I pray to your eyes!”) Dulcinée then appears for a duet that has no counterpart in the novel. Don Quichotte sings to her poetically of la fleur de tes lèvres!—“the flowers of your lips”—and she flirts with him encouragingly, enjoying the attention and finally sends him off on a quest, as a preuve d’amour…—“test of love”.

Ruperto Chapí (1851-1909) was one of the foremost composers of the Spanish national op- era known as zarzuela. Reportedly the composer’s favourite of his many zarzuelas, with a libretto from his frequent collaborator Carlos Fernández Shaw, the one-act La venta de Don Quijote takes place in a mill. Present are a priest, his niece, a barber and the housekeeper of a certain Alonso Quijano who had vanished from his house a few days earlier in the company of his friend Sancho Panza. Who should arrive shortly but Don Alonso, now Don Quixote, with his “squire” Sancho, mistaking the mill for a castle and the landlady for a spellbound princess. Cervantes himself is a guest at the inn, and witness to the scene which inspires him to write his great novel.

In the short aria En el cielo de Oriente la luna raya (“The moon shines in the Eastern sky”), a shepherd offstage sings how the face of one the girls of the village resembles the moon. While short, the piece is an excellent introduction to the particular rhythms of Spanish zarzuela.

In 1861, the Real Academia Española commissioned successful playwright Ventura de la Vega to produce a new theatrical version of Don Quijote de la Mancha to be performed on the anniversary of Cervantes’s death. The composer Francisco Asenjo Barbieri (1823-94), another great name of Spanish zarzuela, provided one musical number for each act.

The romantic tenor aria “¿Quién menoscaba mis bienes?”, sung by the character Cardenas in Act I, is a love poem taken from the novel. It takes the form of an ovillejo: three pairs of rhyming long and short lines (known as pies quebrados, or “broken feet”) followed by a rhyming quatrain. Cardenas is a love-lorn poet found barefoot and bedraggled by Don Quixote and Sancho, pining for Luscinda.

A collection of poems by both award-winning and emerging poets from Hong Kong, Singapore, the Philippines and beyond, Quixotica illustrates how Don Quixote continues to inspire and illuminate across oceans and centuries.

This evening’s selections are from some of Hong Kong’s best-known English-language poets. These include a cycle of three poems by Viki Holmes in which she re-imagines Dulcinea. followed by three poems by Page Richards (“An offering to the one who properly goes mad”), Kate Rogers (“My father and Don Quixote”) and Tammy Ho Lai-Ming (“Books as wild grass”), in which the themes of Don Quixote are brought forward to illuminate the present-day.

These four songs by French composer Jacques Ibert (1890-1962) went on to feature in the 1933 film, starring Chaliapin.

The text for the first, “Chanson du départ” (“Song for the departure of Don Quixote”) is by sixteenth-century poet Pierre de Ronsard. It tells of a castle and knightly virtue and has deliberate antique flourishes. The other three songs have texts by contemporaneous poet Alexandre Arnoux. In the “Chanson à Dulcinée”, Don Quixote sings about being apart from Dulcinea. He continues his praise of Dulcinea in the “Chanson du duc” (“Song for the Duke”). And in “Chanson de la mort” (“Song of Death”), he implores Sancho not to cry for him: Ne pleure pas Sancho, ne pleure pas, mon bon.

MITCH LEIGH
Selections from the Musical ‘Man of La Mancha’

I, Don Quixote
Aldonza
Dulcinea
What do you want of me?
The Impossible Dream

This Broadway musical, with music from Mitch Leigh (1928-2014), is based on Dale Wasserman’s teleplay I, Don Quixote. It takes the form of a play within a play, with the author Miguel de Cervantes having been thrown in prison. The recital concludes with the best known selections from this ever-popular example of musical theatre.

In “I, Don Quixote”, the elderly knight sings of his duty: “I am I, Don Quixote the Lord of La Mancha; my destiny calls and I go…” In “Aldonza”, the object of Don Quixote’s chivalric affections protests that “I am not your lady! I am not any kind of a lady! I was spawned in a ditch by a mother who left me there…”

In “Dulcinea”, Don Quixote sings to Aldonza, who is still trying to convince him of her true identity: “Dulcinea… Dulcinea… I see heaven when I see thee, Dulcinea…” She protests in “What Do You Want Of Me?” and asks Don Quixote “Why try to be what nobody can be?”

And no concert would be complete without “The Impossible Dream”. Aldonza asks “Why do you do these things?” and Don Quixote famously replies “To dream the impossible dream, to fight the unbeatable foe, to bear with unbearable sorrow, to run where the brave dare not go…”

The set ends with the duet, “Odi l’aura che dolce sospira” from the azione teatrale, La pace fra la virtù e la bellezza (theatrical action: The Peace brtween Virtue and Beauty) of 1738. Here, Beethoven exquisitely depicts the rustling breezes and roaring waves in the piano. Against this backdrop, the singers echo one another of the delight and sorrow brought by love. 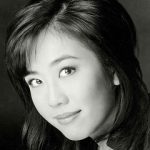 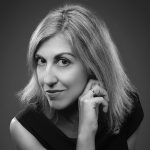 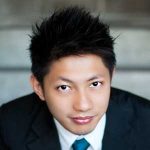